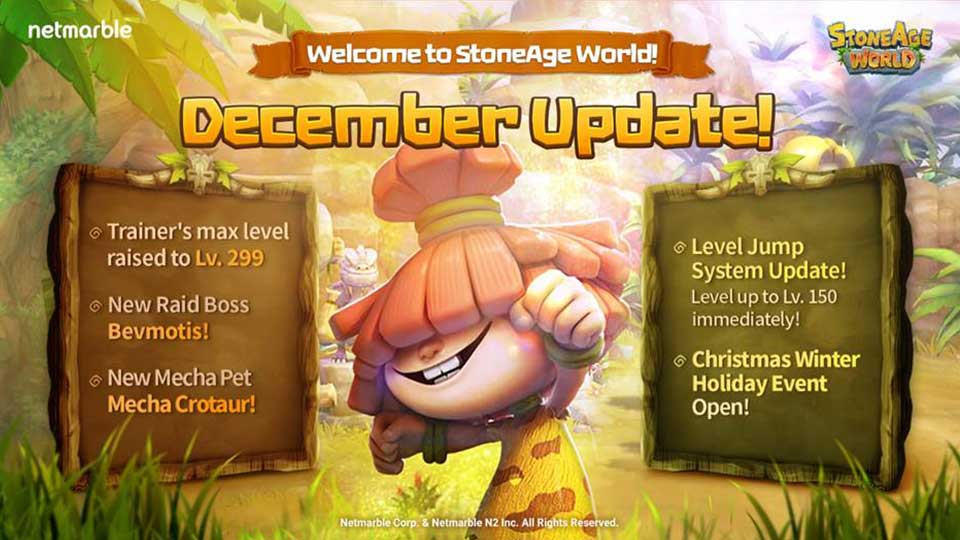 Netmarble today announced that massive changes have been made to its prehistoric pet collection mobile MMORPG StoneAge World in its latest update. From December 9 to January 20, the Winter Festival Gift Exchange Event will allow coaches to exchange special holiday-themed items and collect the Bammi Family, Firera Family, and Ptecus Family. Trainer perks and more content are also available for players.

New and old trainers can now explore the most difficult areas of StoneAge World with the addition of the â€œLevel Skipping Systemâ€. From now on, any Lv. 12 to 149 players will immediately increase their Coaching Level to 150, with the corresponding rewards sent to their mail. Expert players above lv. 180 can also explore the newly opened underground abyss to take down the new Raid Boss Bevmotis and have a chance to collect fabulous rewards, including materials to craft Bevmotis’ bracelet. Finally, the newest Mecha Pet Mecha Crotaur can also be collected by using Mecha Crotaur Coins earned by completing any level in the raid system or by purchasing them from the shop.

Super Robot Wars 30: How To Build The Best Team

Interview: A day in the life of a threat hunter