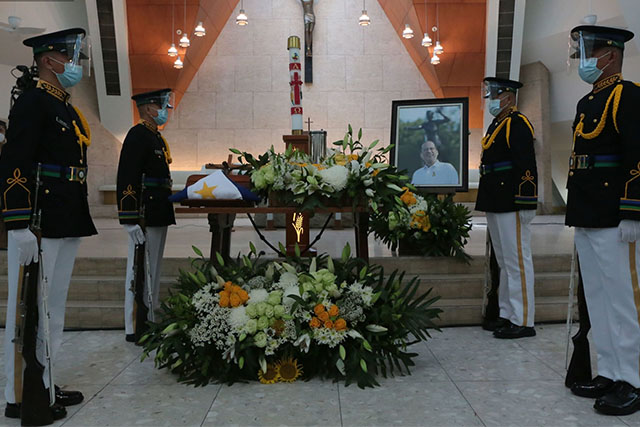 Did you know that an anime tune was used at some point during the arrival rites of the former president Benigno “Noynoy” Aquino III?

Some anime fans have recognized the instrumental version of a song used in the popular mecha anime “Gundam Seed DestinyWhen the group of uniformed personnel brought the urn of the late chief executive to Gesu church on June 25.

The public exhibition of his remains took place in his alma mater at Ateneo de Manila University before his urn was laid to rest at Manila Memorial Park on June 26.

The state-run People’s Television Network (PTV-4) broadcast a live program of public viewing that featured military honor guards escorting Aquino’s urn outside the church. It was also posted on his Facebook page.

A broadcaster reported that an instrumental song titled “Kimi to Boku, Todokanu Omoi” (You and Me, Unfulfilled Feelings) suddenly played around the 3:38 minute mark in the sequence.

In the anime, a song titled “Kimi wa Boku ni Niteiru” (You Are Similar to Me) was used as the fourth ending theme song. He was performed by See-Saw.

Its story takes place two years after the signing of the peace treaty between fictitious “natural” or earthly humans and the “coordinators”, genetically improved humans in the orbital colonies.

The sequel focuses on the continuing threat from a group called “Blue Cosmos,” a radical anti-coordinator militant group made up of resentful natives who abhor genetic modification.

Meanwhile, the particular moment in Aquino’s wake, while brief, caught the attention of some anime fans as they didn’t expect such a tune to be played during the rites of arrival.

â€œMy father was watching a local report on the very recent death of a former president and he texted me asking if I recognized the music that was playing. F ** kers actually played literal music from Gundam SEED to air on their nationwide live show covering the death of a president. Holy f ** k LMAO, â€wrote one Twitter user with an accompaniment video.

â€œOHMYGOD, I still remember the lyrics to that song !! It was so good but so sad huhuhu â€, another user commented.

Others wondered if Aquino could be a “fan” of the animated series.

â€œMaybe the man was a GSD fan? Stranger things have happened, I guess, â€one individual wrote in a forum on Anime News Network.

Aquino died in his sleep on June 24 from kidney disease secondary to diabetes. He was 61 years old.

He is the only son of democracy icons, former senator Benigno “Ninoy” Aquino and former president Corazon “Cory” Aquino.

Robots ready to revolutionize the safety of the offshore energy industry